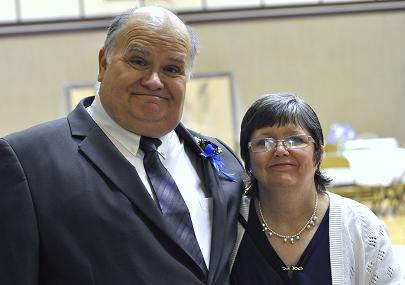 I am making an update because I finally do have something published. My novel Bridging Gaps went live on Amazon today. It is in the clean romance genre and I believe a pleasant little story.
Updating my last entry my beloved wife and I have been married forty-six years now. We have the same seven children but now have sixteen grandchildren. The oldest graduated college this year, the youngest two are just starting to walk. I am semi retired and have lost a couple of pounds.

After thirty years I have grown as a person, in fact ten more pounds and I will have grown into almost two people. I have seven children, three grandchildren, and have been married for twenty-eight years to the same wonderful wife and sweetheart.

I retired as a Lieutenant Colonel from the US Army Reserve in 1998.  Although dedicated to leisure as a concept, I have had forty-five  different jobs since leaving OHS; so I have not spent a great deal of  time on leisure. I currently work for Washington Mutual Bank in the  benefits department.

I have not achieved fame, fortune, power or influence in the thirty years since OHS, but have achieved happiness and a perspective that tells me happiness is a good accomplishment in itself.

In my spare time I have written a screenplay, numerous short stories and a novel. I have also written hundreds of checks but they haven’t been published either.

I look forward to seeing people on the Friday night meeting but will be unavailable for anything on Saturday. I welcome email and occasionally read it.

After leaving Ogden High School with low academic honors, David Dabling attended Weber State College with equal success. Graduating with a major in Theater Arts, he was commissioned a Second Lieutenant in the U.S. Army. After four years of active duty, he returned to Weber State to obtain a second bachelor degree in Elementary Education. After teaching for two years in Idaho, he returned to Utah to work for the Internal Revenue Service, the Forest Service, and finally the Defense Mapping Agency. He is the fortunate husband of Zilpha Eulalia Westover and the father of seven, ages one to 17. His oldest has lettered for Ogden's Cross Country team for the past three years.